German Prisoner of War Camp 20 in Gravenhurst, Depicted in "Lighting the Stars" 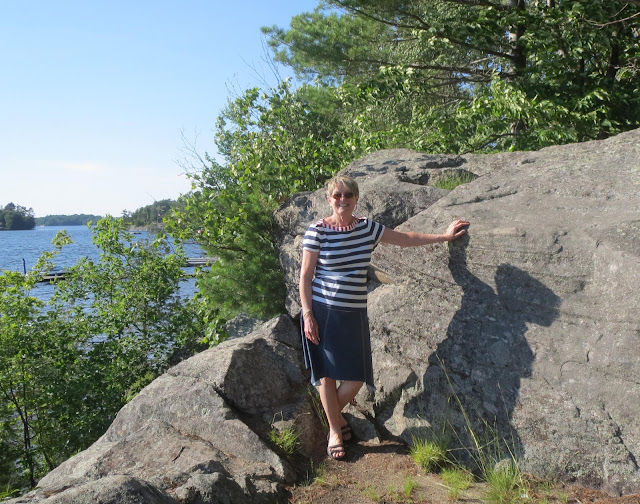 Here I am at the exact spot where "Lighting the Stars" begins. 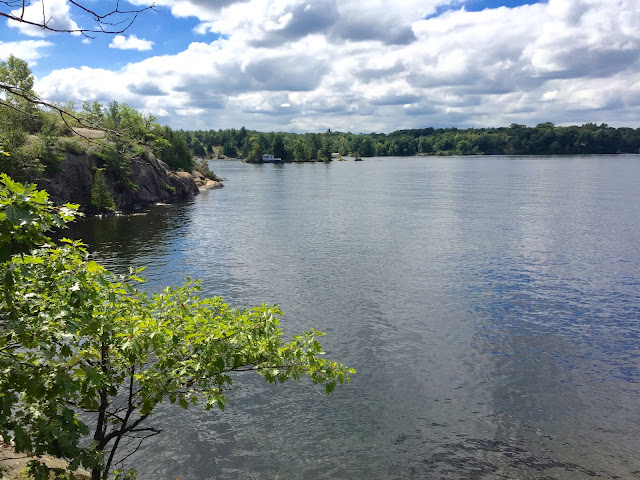 This shows the view from that cranny. Merilee's home - fictional Hope Cottage - lies on the other side of that rocky promontory.

This is now Ungerman Park, which is part of the larger site of the sanatorium-turned-POW camp that actually existed here in Gravenhurst. If you go into the park at the waterfront entrance (at the west end of Lorne St.), you'll see a large board with photos and descriptions about the camp.

It's a lovely spot to ramble. And you can swim at the same beach that the POWs did. 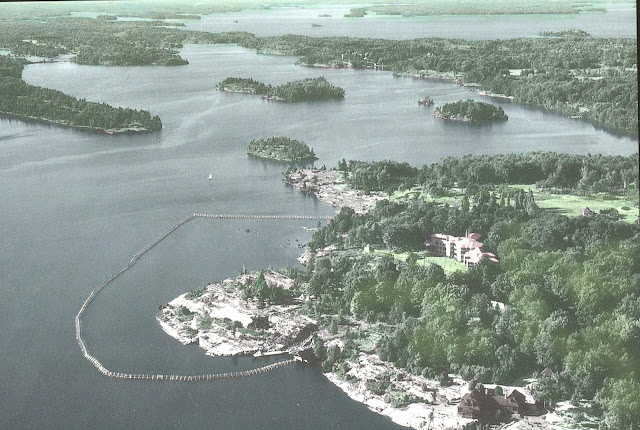 Here's an aerial view of Camp 20. The boom fence delineated the prisoners' swimming area. The house at the bottom of this photo could have been Merilee's fictional home, although different in style. If you look carefully, you can see the top of another house at a clearing just beyond the mass of trees on the right, before the next bay. I used that as the Wildings' house.

The red-roofed building - the former private Calydor Sanatorium, which closed in 1935 - was where the German officers were housed, as seen below. 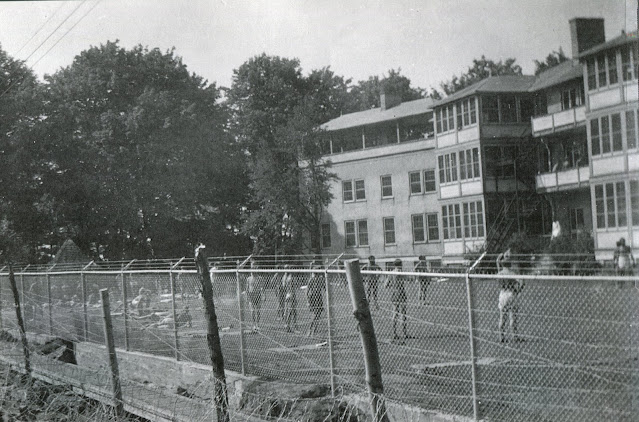 The old sanatorium building housed the German officers' quarters, classrooms, infirmary, kitchen, canteen, games and exercise rooms, library, mail room, and so on.  With an average of around 400 prisoners in the camp at any one time, you can see that the area for them to play sports in the grounds was limited. 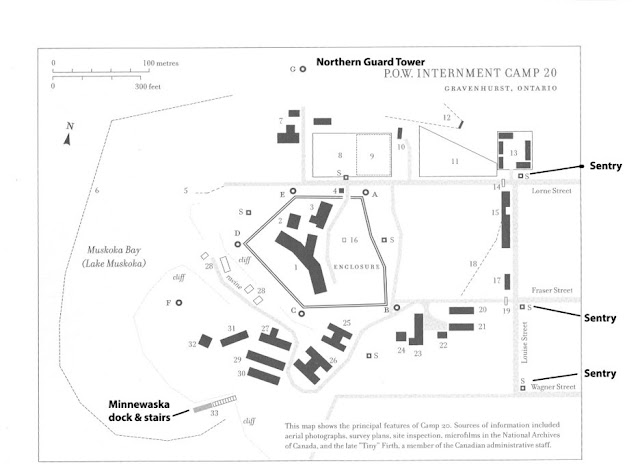 This map shows the layout of the camp. The main prisoner enclosure is relatively small - buildings 1, 2, and 3 -  the rest were for the Veterans Guards and Canadian military personnel, with #7 being the Canadian officers' complex.  #15 right next to the outer fence was the detention centre. Building #10 is listed as "private residence", which is what I used for the Wildings' home. 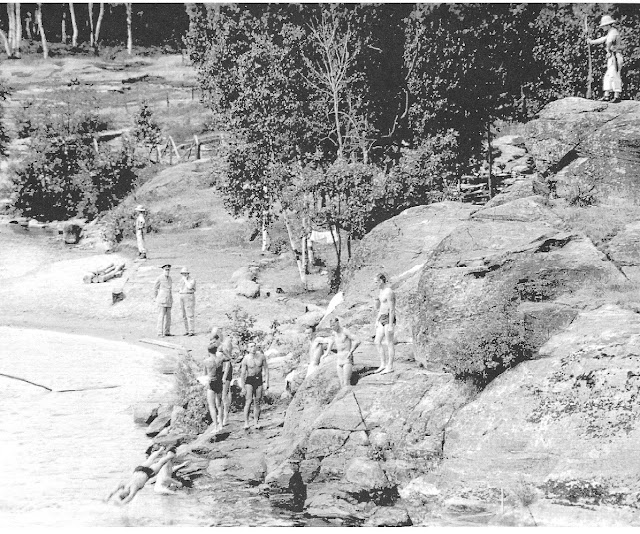 Here is the beach where the German POWs swam. You can see from the colour aerial photo above that the boom fence goes well beyond that rocky bluff. In this photo you can see a prisoner diving into the water at bottom left, and a few more awaiting their turn. The guards, like the one at the top right, might well have been envious of their charges frolicking in the lake on a hot summer’s day. 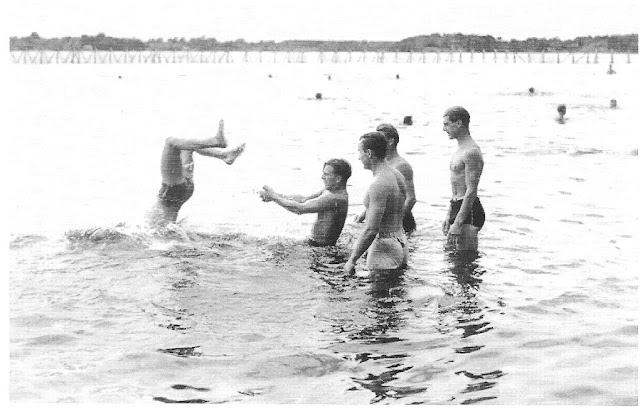 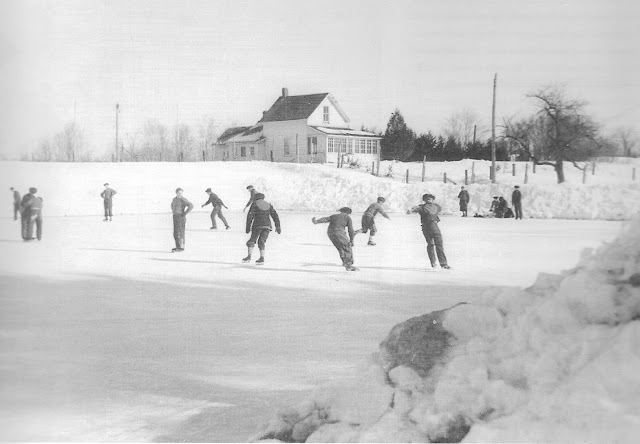 The concept of “parole” seems strange in the context of war. The German officer POWs at Camp 20 were obliged by their loyalty to the Fatherland to try to escape while in their prison compound. But if they gave their “parole” – promise not to escape – and were let out to swim, skate, work on their farm, etc., then they were honour-bound to adhere to that or face execution for dishonourable conduct back in Germany after the war.

There was a reciprocal agreement with Germany that the Canadian prisoners there could also get out on parole.

In these photos we see the POWs on parole skating – some in their prison garb with a big red circle on their backs – in front of the civilian house (#10 on the map) that was within the outer boundaries of the camp, and which I used as the Wildings' house. 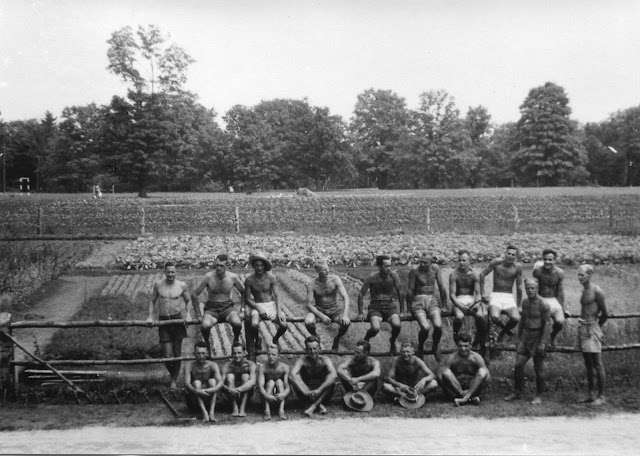 This photo shows the POWs at their farm, which was a few miles from the camp, and which not only provided them with fresh food, but also with a sense of freedom to work the land, fish and bathe in the nearby stream, and even wander into the surrounding woods alone for short periods.

As many as 100 men at times would daily be marched the 3 miles each way by a couple of unarmed Guards.

I was lucky enough to find 3 fascinating English memoirs from Germans who had been interred at Camp 20. Two of them loved it so much here that they emigrated to Canada after the war. One of them appears to be the guy on the very right, who ended up owning a cottage in Muskoka.

Here we see POWs being marched through the streets of Gravenhurst to their "Gilded Cage". That's the title of the excellent and well illustrated history of Camp 20 written by Cecil Porter. 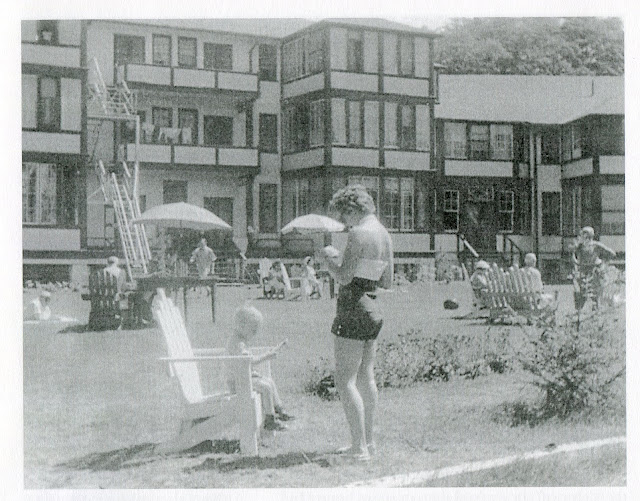 After the war, the property became the Gateway Hotel, which, ironically, was the largest Jewish resort in Canada. But it also welcomed former POWs, who had fond memories of Muskoka. Here you see a former prisoner’s wife and son.

Over 35,000 German troops were sent to camps in Canada. 6000 of them asked to remain here, but had to be repatriated first. Many did eventually immigrate once Canada opened its borders to them in 1951.

Posted by Gabriele Wills at 1:47 PM