The sinking of the Lusitania on May 7, 1915 by a German U-boat is an important chapter in The Summer Before the Storm. Although she was a passenger liner with almost 2000 men, women, and children aboard, she was also carrying empty shell casings and over 4 million rifle cartridges, unbeknownst to the public. The Germans claimed that she was a legitimate military target, and had given people fair warning.

The German embassy had placed a notice in American newspapers stating “vessels flying the flag of Great Britain, or any of her allies, are liable to destruction in those waters [adjacent to the British Isles] and that travellers sailing in the war zone on the ships of Great Britain or her allies do so at their own risk.”

Tragically, 1198 people died when the torpedoed ship sank off the coast of Ireland in only 18 minutes. People worldwide were shocked and outraged, and even a few German newspapers condemned this attack on civilians.

A few months later, a Munich sculptor, Karl Goetz, privately created a commemorative medal of the sinking as a satirical statement, blaming the Cunard line and the British government for allowing the Lusitania to sail into perilous waters.
The medal attracted so much attention that the British head of Propaganda decided to use it to keep stoking anti-German feeling. Replicas were made by Selfridges, and profits from the sales of 250,000 medals were given to the Red Cross.

I’m thrilled to have just received one of those replica medals, thanks to the generosity of John Reynolds, a fan of my Muskoka Novels. It’s exciting to hold something so old and, to me, significant.

Here is the document that came with it, which explains what’s on both sides of the medal. The reverse side is pictured below. 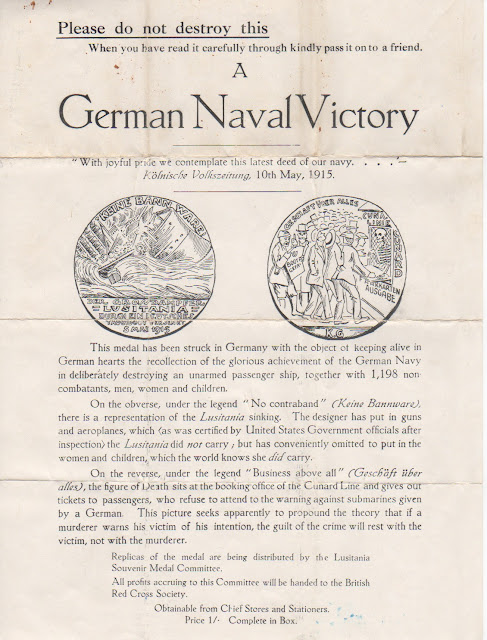 You can also sail aboard the doomed ship with some of my characters in The Summer Before the Storm.

Posted by Gabriele Wills at 11:13 AM No comments:

This rocky waterfront park in Gravenhurst was once part of the private Calydor Sanatorium, referred to as the Lakeview San in Under the Moon.  This is also an important location for the new novel.

I call this spot "Claire's Rock" because it's where sweethearts Claire and Colin met secretly in Book 3.  Fictional Hope Cottage sprawled on the shore south of the Sanatorium, around that bluff.

Posted by Gabriele Wills at 5:35 AM 2 comments: